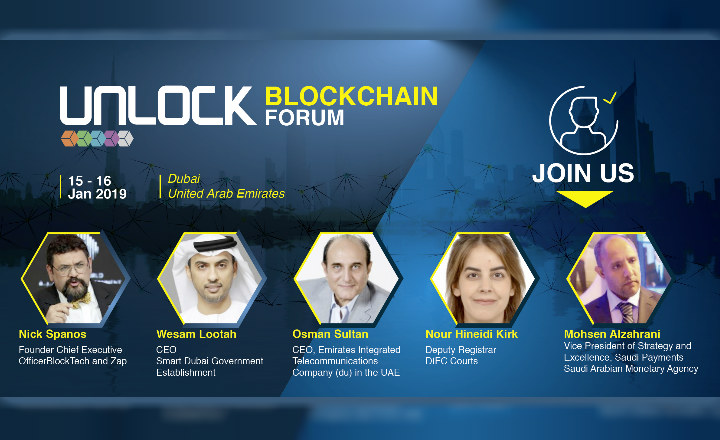 Dubai UAE Jan 7th 2019: The UNLOCK Company DMCC, a platform that provides information, intelligence, insights and news pertaining to the Blockchain sector, is holding its second series of the UNLOCK Blockchain Forum in Dubai, UAE, on Jan. 15th and 16th, 2019, at the Ritz-Carlton Hotel, DIFC.

Walid Abou Zaki, Founder & CEO of UNLOCK, stated, “We are very pleased with our accomplishment this year both in terms of high level speakers and our addition of investors to the UNLOCK forum, as well as our continued support to startups that will be exhibiting and presenting at UNLOCK. Despite the bearish market conditions of 2018, we were able to continue to develop UNLOCK as a platform in our efforts to build the blockchain ecosystem in the region. This year more than ever investments into blockchain will reap benefits as the market matures.”

More than 20 blockchain startups will be participating this year at UNLOCK including names such as unchain.io, BabelChain, Energy One, Helena Energy, UATAG, SophiaTX, Dhonor Blockchain, Addenda, Barter Trade, Cambridge Blockchain, Dubai Blockchain Center and others.

Lara AbdulMalak, Editor in Chief of UNLOCK, stated, “Blockchain in its 10th year anniversary is starting to mature slowly into a reliable platform that will allow global economies to better trade, cooperate, and develop. According to a recent Deloitte Survey on blockchain, the momentum is shifting from learning and exploring to building practical business applications. 74% of those surveyed see a “compelling business case” for the use of blockchain technology; only 34 % say their company has initiated some sort of blockchain deployment. This is indicative that blockchain will continue to grow as a business enabler and technology, as more organizations incorporate it into their business cases.”

Du is presenting UNLOCK this year as a title sponsor, and UNLOCK is also sponsored by DarkMatter, SwissCom Blockchain, Avanza Innovations, and others that have shown their commitment to the digitization efforts in the region.

UNLOCK has also signed more than 40 media partnerships with top leading media players, and will continue to develop these partnerships further. For more information on the UNLOCK Blockchain Forum, please visit www.unlock-bc.com/events/unlock/2019

UNLOCK Blockchain is a service offered by The UNLOCK Company DMCC. It is a platform that provides information, intelligence, insights and news pertaining to the Blockchain sector. We are one of the cornerstones in the evolution of the Blockchain ecosystem in the MENA region and globally. We encourage Blockchain’s disruptive innovation through our support of startups, investors, developers, and clients. Our main offerings include: